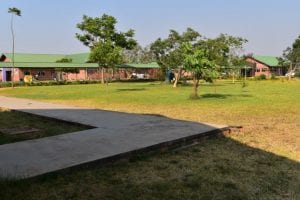 I thought I had budgeted plenty of time for this installation of electrical equipment control panels I designed and built for the Cure International Hospital in Lusaka. These control panels are for controlling which diesel generator set will turn on when the national power system goes “DARK.” The hospital has two generators depending on what time of day they are needed. The smaller generator set will not power the big electrical loads and will be used at nights and weekends so we will need to do LOAD SHEDDING. This gets a little complicated because of the TIME OF DAY and electrical loads required. The larger generator cannot run all the big electrical loads either so we had to do load shedding but not as much as with the smaller generator. In addition, we installed a Large UPS for the OR area to ride through power outages. I had help from the national electricians and an expat biomed coming from another Cure Hospital in Malawi. Ken Thomas came the second week to help with the major part of the wiring since we interrupted power to the hospital on occasion and we needed all the help we can get to minimize the down time. 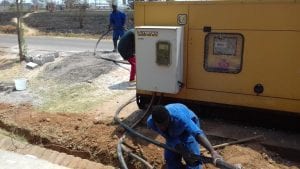 The nationals had done a pretty good job of the preparation work of making wire channels in the control room and purchasing some of the needed electrical items. Nevertheless, time was spent digging new cable ways and cutting through concrete sidewalks etc. Obviously, we did some of the “engineering” installing the physical devices “ON THE FLY.” We had to take into consideration cable lengths because cable is so expensive. Guess which country exports the 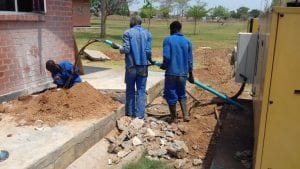 most copper? Zambia. But finished products are very expensive.

Friday evening Jon asked a question on how the controls work which lead to a more in-depth discussion. I spent at least an hour sorting through a rare but possible scenario that needed to be fixed. In the middle of the night, I thought of another change that needs to be done. So, Saturday morning we implemented the change. Fortunately, I had some spares of the devices that I could put into service.

Jon and I started the process of installing the large power cables in the new automatic transfer switches. The cable which has four conductors and an armor stranding around the conductors for protection weighed about 5 Lbs per foot. It is very s and is like wrestling and excited Boa Constrictor. Bending the conductors and shaping them into place inside the automatic transfer cabinet takes a fair amount of energy with lots of grunts and groans.

The first power outage did not go as I had planned. We fixed several problem areas in the existing load distribution panel including burnt wires and added wiring to avoid duplication and under-sized feeders. Access to replace the big cable we planned for was quite difficult and added a bunch of time. Also, we ran out of nuts and bolts and Crimp lugs. I had thrown into our luggage extra pieces from my excess stock in Boone and we used it all up. Without these pieces we would have been in a “pickle.” After restoring power, we tested about 83% of the control panel and circuitry I designed. It all went well with no problems or need for changes at the point. 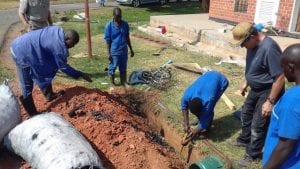 The next day was Earth day in our work. No, this was not some environmental symposium on global warming but connecting all the diesel generator metal parts to an earth rod along with all of the metal cabinets, etc. The earth rod is a 2″ copper rod and it is buried in the ground in a chemical compound to increase conductivity. The actual hole for the chemical earth rod was 12″ wide by 8′ long by 3′ deep. We filled over half of the hole containing the earth rod with very coarse charcoal which is a great conductivity material. When it was all covered up, it looked a freshly dug grave.

Long Day! We started at 6 AM to do the major changeover to the new switching scheme. Our aim was to be finished with normal power back on before the hospital staff reports for duty which was more or less 8 AM. The actual changeover went pretty smoothly wrestling these big heavy cables. Lots of aches tonight in strange muscle packages. I think we put power back on at 8:30 AM and the staff was OK with that. We did a minimal amount of testing which was day time backup with the big generator and 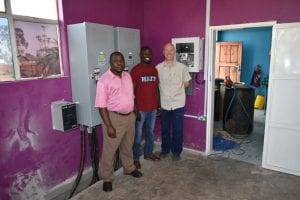 we were happy. After supper we went back and did some more extensive testing of the switching scheme. After some testing, I realized I had some wires connected to the wrong place and we quickly got that fixed. Then after testing a different scenario I realized I had two set of wires reversed between two relays. Once I got that squared away all was good. The switching scheme between two different sized generators, time of day, and multiple failure to start scenarios makes the system quite complicated. I have marked up the diagram and I can sleep well tonight knowing the system works properly. It is now 9 PM and we just finished testing. 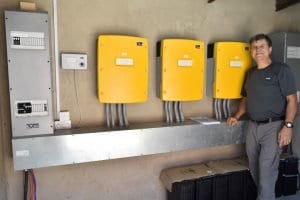 The installation and initial testing of the SMA Battery Inverter system went well. THEN Surgery day! This time it was not on humans but the electrical system in the operating room building. It was time to transfer the critical electrical circuits to the new SMA battery inverter system. Oh what a mess! After finishing, we left a pile of wires on the floor as we fixed many bad connections, broken circuit breakers, wrong sized wires and on and on and on. In the end, I used up all my spare parts and crimp terminal lugs. It is much better but not anywhere close to CODE compliant. A small charge of C4 explosives and some new electrical panels would come closer to resolving the many issues in the electrical system.

The next morning about 6 AM Jon and I went over to the OR electrical room and evaluated what was happening. The SMA battery inverter would randomly trip when the diesel would start on loss of utility power. It would happen occasionally which makes it hard to diagnose. The 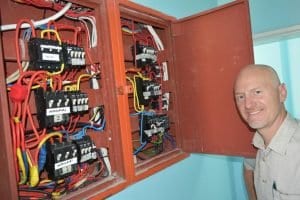 faults were ones I have never seen before. Well, I tore into the electrical panel boards and added wires to connect all the neutrals together and then wiring to tie all the earth wires together. It was a real challenge with very limited space. I took nearly two hours to do the work but got done before the staff came for work. It has worked now for several transitions without a problem.

With the electrical project winding down, we shifted gears and moved the x-ray department. Cure had ordered new batteries for the Quantum Medical Imaging x-ray machine and the GE AMX II portable x-ray machine.

We first tackled the portable x-ray machine as it was clinic day and patients were lined up for x-rays. We pushed the portable into the hallway and did a “Battery Transplant” procedure. We spent lots of time on the floor installing the new battery jumpers and arranging the batteries. It provided entertainment for the waiting patients. After turning the machine ON, I did the calibration of the battery charger voltage cutoff and a quick calibration check of the x-ray machine. We then moved a gurney in the hallway so the technician could do x-ray studies while we were working on the Quantum Machine in the room.

Next, we torn into the Quantum machine and did another “Battery Replacement” procedure. This surgery was more involved as it contained (60) smaller batteries arranged in two shelves. The time crunch was on because the machine was needed the next morning. I finished about 5:15 PM so the batteries could start charging. We had a lovely dinner at the Directors house and then I went back to the x-ray machine to check battery voltage and charging at 9 PM. At 6 AM this morning, I was back at the x-ray machine calibrating the charging and general KVP and MAS calibration. By the time the technician came at 8:15 AM, the machine was ready.

We then moved back to x-ray to fix the elevator table. Someone did some less than honorable modifications. We tore all of that out and replaced with proper switches. I re-calibrated the height of the table to the indicators on the tube stand. It is like a new room with the x-ray machine having new batteries, calibrated, all the locks working, and the table working. It was a great way to wind up the work here. 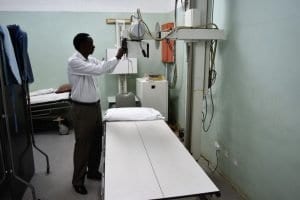 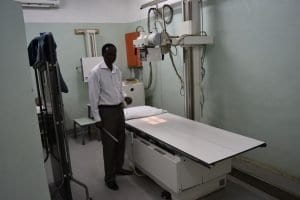