Radiography at most healthcare facilities is essential for patient care and disease diagnosis. The ability to obtain a radiographic image means can make a significant difference in outcomes. For instance, I was in South Sudan a few years ago, and installed a small portable x-ray machine at a remote clinic. Film and chemistry were very expensive and hard to obtain because of the remoteness of the facility. A patient came to the clinic with what appeared to be a wrist problem. The doctor said he would “reduce” it and that he did not need an x-ray film. Since this was a new installation and the new x-ray technician needed practice on relatively simple position and films I asked if we could do a film. The doctor was reluctant because of the cost but finally gave permission. As he was reviewing the film, he thanked me for taking the x-ray because the film revealed a complication he was not expecting.

During a radiographic exposure, the voltage and current to the x-ray tube must be held constant and the appropriate level during the entire exposure or the image will be degraded or spoiled entirely. This is a significant concern because of “SOFT” electrical supplies and distribution. Because of high electrical current demand s during the exposures, the voltage to the machine often drops excessively. Large exposures such as ABDOMEN, LUMBAR, and SKULL require x-ray techniques with long exposure times and maximum x-ray tube current. If the electrical system cannot deliver electrical power at those levels, the exposure is ruined. I have seen an x-ray machine DIM the lights to an entire building during a LUMBAR exposure and still not get an image on the film.

The Solution to this power quality problem is a “Stored Energy” High Frequency x-ray generator which uses batteries to supply the energy necessary to do the exposure.

This machine use a high frequency battery inverter circuit to produce the power for the x-ray tube. The results are each exposure is consistent and repeatable. Unfortunately, there are very few manufacturers of this x-ray equipment because of little demand for it here in USA because normally our electrical power source is adequate.

Portable x-ray machines need to be portable! This sounds like a misnomer but portable x-ray units used in USA hospital settings are large battery operated machines to be transported within a building. This is not the case in most remote healthcare facilities around the world. Often there are multiple buildings at various elevations sometimes connected by a paved walkway. These large machines cannot be moved from building to building under these conditions. Smaller machines with bicycle type pneumatic tires is a much better solution. These newer High Frequency machines can perform 85% of the x-ray requirement of a clinic or hospital. The power source can simply be a wall receptacle. The technology of these machines evaluates the electrical source and sets itself to proper limits and exposures.

X-Ray film images are highly dependent on the x-ray technician is several of the following ways: 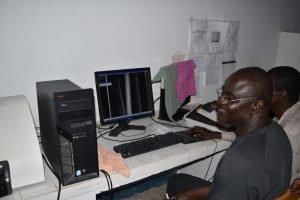 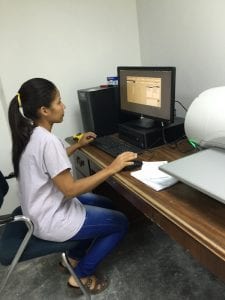 Another concern with x-ray film is long term storage. X-Ray film does not necessarily degrade with time. The question becomes does the patient keep the film or the hospital? Often times the film is necessary for proper diagnosis of the progression of the disease. Neither solution to the x-ray film storage is good as patient loses a film and the hospital records area is in disarray to the point the film cannot be found. 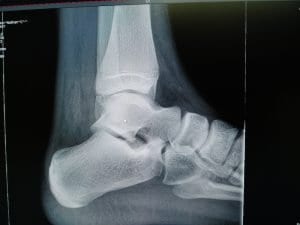 Digital images with software can take the level of healthcare to a high diagnostic level instantly. Post processing of an image with zoom and magnification can quickly reveal a diagnosis hidden in a “margin” x-ray film. I had just installed and calibrated a digital CR system when a lady came into the x-ray department along with her surgeon. They had heard there was a digital unit at the facility. She was experiencing knee problems which she had endured for many years. Within just five minutes we had the image on the monitor and the surgeon had diagnosed the problem. She later told me she had many many x-rays over the years with no diagnoses.

Digital equipment is as expensive as the x-ray machine itself. But the real problem is what does the department “do” with the digital images.

If the patient requires a “hardcopy” there are four solutions:

In the developing world with many cultures, some of the above solutions are impossible. Nevertheless, for the physician in a remote location having a reasonable access  to internet, sending a digital image to a “FRIEND” by email who can interpret an image could mean LIFE and Death for the patient.