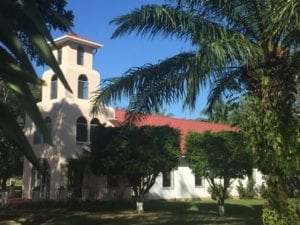 Many years ago (about 28), I was involved in in-stalling a hydro plant at El Sembrador. The facility is now wanting to save water for irrigation and to extend the stored water in the reservoir for longer periods of time through the year. The farming activity of El Sembrador is the funding source for the school for indigenous Honduran students preparing for higher education. El Sembrador, translated The Sower, is a ministry of World Gospel Mission based in Marion, IN. The facility has been serving indigenous students for 60 years. They received a donation of funds and elected to purchase 40 KW of solar equipment to run in parallel with the hydro plant. The Installation trip to El Sembrador as was supposed to happen in December 2017. Nevertheless, Hon-duras had national elections in November 2017 and not every-body liked the results. There were riots and street activities not lending to safe travel in December, so we postponed the trip. 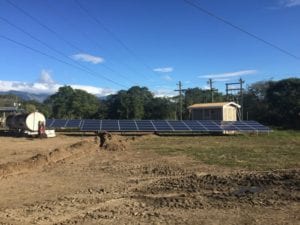 Since these were ground mounted solar arrays, we needed holes dug to accommodate the upright supports of the substructure holding the solar panels. The field where we were putting the solar panels looked like a huge mole has been very busy. The contractor drilled 36 holes, 16” in diameter by 48” deep with an hydraulic driven auger. Sure was much easier than digging by hand. Of the 36 holes, only a few were not in alignment but within tolerable limits. 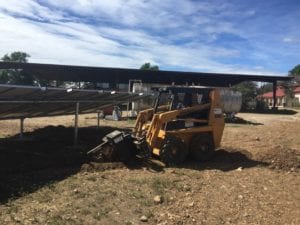 Shannon and Ryan, along with a couple of Nationals, very carefully laid out the placement of the upright supports which is 3” galvanized water pipe. Then the cement started to fly setting the uprights. By day’s end, 16 of the 36 uprights were in place. I was totally amazed at the accuracy of placement and speed of making it happen. Once the

substructure was assembled , Shannon determined our angle of the panels as 14.78 Degrees using an optical level device. We were designing for 15 Degrees! The hard part of a project like this is staying precise with measurements and executing mundane tasks consistently. There are 132 panels that needed to be installed level and plumb with consistent spacing. Every bolt required to be properly torqued with a torque wrench.

Meanwhile I laid out the electric wire runs, electrical panel boards, location of the inverters, etc. Because of changes in the location of the arrays due to physical obstructions, El Sembrador needed to purchase wire, PVC conduit and fittings to accomplish this work. We have decided to replace the wiring going to the high voltage transformers because the existing wiring is too small to feed the power from the new solar inverters to the GRID. The service was a little LIGHT anyway, so this was an excuse to beef up the wiring. Jorge, the nation-al electrician, got quotes and availability from Catacamas the nearest town. It was so good to have a great support team! 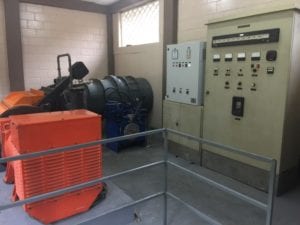 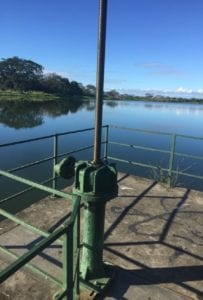 About a month ago I got an email from El Sembrador that the turbine was not working well. I quickly sent an email giving several suggestions. I found out the turbine was tripping all the time, but they decided to wait for me. So, I spent part of my time troubleshooting the turbine problem. We made some adjustments and I thought I had it fixed but its till lingered but a bit better. Subsequently, Jorge and I did more troubleshooting on the turbine and determined after 27 years of operation the guide vane bearings needed to be replaced. I initiated an email to Ossberger, the manufacturer, to start the process of purchasing new bearings. Unfortunately, we found out that the turbine will need to be returned to Germany to be refurbished due to the design the guide vane bearings. The turbine should leave El Sembrador very soon for it journey back to Germany. To compound the problem and restrict our ability to troubleshoot the turbine was the main reservoir gate valve would not seal off the water coming down the penstock from the reservoir. The staff at El Sembrador has since drained the reservoir and found significant dam-age to the gate operating guides and shaft. MORE REPAIRS! 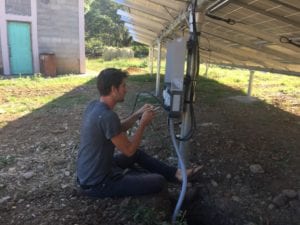 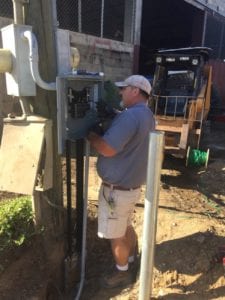 crawling around on the rough rocky soil under the panels. After we connected and attached the solar panel jumpers and wiring, we did the conduit runs for the output AC side cables from the solar inverters going to the connection point of the solar system to the GRID.

The commissioning process was very easy. Praise the Lord!!!! We did have to call Fronius technical support for the procedure to change input limits on the inverters. Since we were running in parallel with the hydro plant, all I had to do was change the limits on frequency input of the solar inverters. The hydro turbine responded slower than the solar inverters ramp up time.

The solar system was working great. We saw the system run at maximum output at 12 noon in full sun. Afterwards, we spent two hours getting the DataManager circuit board programmed so the solar system outputs would be available on Internet to monitor Live from whatever. This IT stuff was difficult for me and required me to call technical support twice. The technical support people at Fronius were very helpful and coached us through a lengthy process.

We left a couple of days early because of probable political unrest starting again prior to the inauguration of the President. We were getting out of Dodge City before the “Activities” began.

Update: The solar system is providing the majority of the electrical power for El Sembrador while they are connected to the national GRID because the hydro-plant and main reservoir gate valve being repaired. God’s Timing is PERFECT!