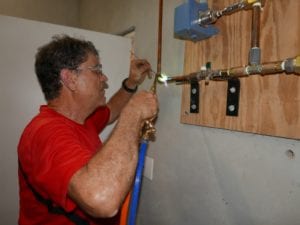 Thanks for praying for travels for me. We arrived safely at Hospital of Hope in Mango just 2 minutes before supper time. We left Lome at 8:30 AM so it was a Long, Long, Long day on the road. The road was in miserable state with huge pot holes from grossly overweight trucks. I think I counted 10 truck accidents where they ran off the road, ran into another vehicle, or went off the cliff. Many more trucks with broken tires or axles. People, animals, and a gazillion motorcycles plague the road with obstacles. An adventure at best! 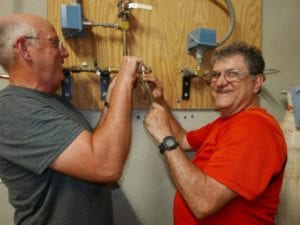 Well, things happen! We installed the timer relay on the small diesel generator set Automatic Start Circuit and the initial testing was OK. BUT when we actually started the diesel generator, the battery voltage dropped so much that the new timer relay also de energized. Loving the local African/Chinese Battery! I had them add a small 12 VDC battery that just ran the Automatic Start System independent of the battery that starts the engine, and all was well! Now the hospital has a backup to the large backup generator. 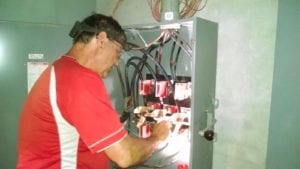 We went to the DeKryger house to work on their Out-Back Battery Inverter System. One of the Inverters showed an ERROR. On the previous trip, I inadvertently brought the wrong Circuit board supplied by OutBack to fix it. I installed the new AC board and Controller board and it still showed ERROR. Each time I replaced circuit boards it took me about an hour of disassembly and reassembly. Soooo, I took it all apart changed the Controller board and reseated all the ribbon cables. This time it showed a flashing ERROR light and the inverter came ON. I checked the ERROR status and it was a cooling FAN WARNING. No kidding because the fan was not running. I have ordered a replacement fan and sent it to Togo.

Next, I went to Chad to work with the Schneider battery inverters that are misbehaving occasionally. It appeared that the Firmware between the three inverters needed to be updated so they will all run the same version. I am brought a spare Control Circuit Board and the software interface module for doing programming. Fortunately, I was able to practice on two inverters I had in Boone. 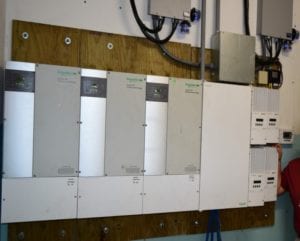 After updating the Firmware on the inverters using the Configuration Tool interface with my computer, the inverter system still occasionally glitched causing a momentary shut down. I finally got the bottom of the fault and it was in inverter #2 because I thought the fault was with inverter #3. I took off the covers and reseated all the cables and connectors on the circuit board. Our friendly folks at Schneider glued the Connectors and they were a royal pain to remove. One of the Connectors was already broken and the ribbon exposed. I took a toothpick and seated the ribbon as best I could. I ran through the Configuration procedure again and it glitched after for 6 hours. I think there may be an intermittent problem in the COM board. The Error is “Unit Failure” which is think is like a Blue Screen on a computer. It is a momentary glitch which causes the F70 error in the other inverters. Dog Lips!

While monitoring the Schneider inverter system, I worked with all the solar systems that were configured with devices purchased in Togo (Chinese Junk). I removed (8) old batteries from x-ray. There was an entire ecological sphere grow-ing under that counter top. I felt like I need to be “cleansed” afterwards. I installed (2) batteries of marginal quality and the system actually charged up. Next I replaced (4) batteries on the new house. They were reasonably charged so the system did not need any more attention. Next I replaced the solar controller on Claire’s House. We only had less than 1 hour of late afternoon sun so it was not a very good test. The battery voltage actually did increase so I am hopeful in normal sun. Next I replaced the solar controller on another house and undid all of the creative wiring done by a Togolese technician. I am not sure what electrical/solar book he modeled the system after. It was creative but not technically sound.

I replaced the batteries again looking for some at least marginal ones for the short term visitor House. I tried (3) differ-ent solar controllers and I think one of them worked. I added two marginally good batteries to Claire’s house and the results were “marginal.” Frustration with JUNK from China and Korea had taken its toll on me. These were very inhospitable places to work on these systems and I was only getting mediocre results. I was thankful for kneepads.

One of the single gals told me in the morning that she slept pretty well because they had fans all night. It was indeed the sweetest thing for me to hear since I had spent equivalent to a day’s work on my knees in the battery cubicle trying to get at least some solar stuff working. I was told the private wards had lights last night also.

I awoke at midnight and it was as if God smacked me and said “Just replace the Controller Circuit Board in Inverter #2.” I promptly gave Him several excuses ranging from just plain “No” to I would have to drag all my computer stuff over to the room again, and I need to finish the dentist office. HE was patient as I poured out my reasoning and excuses but He said “Just replace the circuit board.” I did have a good and tested circuit board with me. I fell back asleep.

In the morning I went over to look at the Fault log and there were scattered problems but then whilst I was there the inverters flipped and flopped several times in the course of a minute. He said, “Just replace the circuit board.” Within 30 minutes I replaced the circuit board and reconfigured the inverters. The system worked without a fault for over 24 hours and Dr. Bert had an emergency c-section in the evening and the power system worked well.

The day after I left the Schneider inverter started to cause problems again. I have recommended replacing the entire inverter #2 with a unit I have in Boone. Installation and commissioning will be an issue.