Bill arrived in Malawi- Partners in Hope Hospital- on Saturday evening for the third attempt since May to commission the SMA Multicluster Box (sort of the “brains” of the solar system installed in May). SMA agreed to send a technical representative from South Africa to do the commissioning afer Long, Long, Long negotiations through email both with Germany where the factory is located and the technical staff located in Cape Town South Africa. Good news-that person arrived in country so he could begin the trouble shooting in the morning. Bill was looking at this short one-week trip as a learning opportunity but more importantly, to hopefully finally see the equipment working properly. By the way, the need is becoming more urgent with the arrival of the dry season which is resulting in increasing electrical outages. In order to stay fully operational, the hospital will need the newly installed solar system and Multicluster Box to work as it should so the hospital’s full electrical load can be met when the national utility goes down. 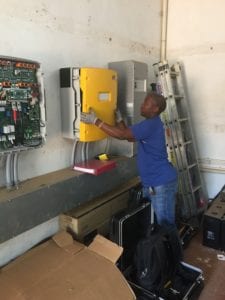 After extensive testing, programming, moving wiring around, and redoing all the Ethernet wiring, we were in a slightly better position but it was still not working properly. Siya from SMA knows this system very well and was quite capable has reached a conclusion that indicates the ma-chine is doing one thing but the software says it is reporting something quite different. We went over all my previous emails and Siya said I had talked with all the head people about the is-sue. Hopefully now with his input, they will take a serious look at this problem. Siya from SMA did more testing and then spent nearly 1 hour sending data and observations to contacts in Germany in the technical realm. He received a reply from another applications engineer who sent a Beta ver-sion of software and programming settings. They also recommended bypassing the Grid Connect Box. Well, for the first time we saw two Clusters running both in Isolated Mode from the Grid and synchronized with the Diesel and/or Grid. It is running in a modified Of Grid application which is not optimal but quite acceptable. At dinner, we chatted and he revealed this is only a temporary work around and the R&D folks from SMA need to come seeking a permanent solution. There is one relay that is still not working correctly but Siya has forced it but still needs a software or programming solution. He also said that he came to verify circuitry and programming for the SMA R&D department.

Praise the Lord! At 10:33 AM the next morning, we finished reconfiguring the batteries so each Cluster has 2000 AHr of new batteries. It was a back-straining proposition but had to be done. Siya quickly programmed the system to reflect the new battery bank and turn everything back ON. No glitches! We transferred the electrical Loads to the new system and it worked well. I wanted to do a hallelujah dance but I was not sure how it would be accepted so I just a smiled. It is not all completed yet as Siya has concerns about the configuration that will need to be confirmed by SMA Germany. I set up the power analyzer to keep track of performance of the system over the next two days. 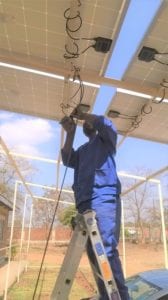 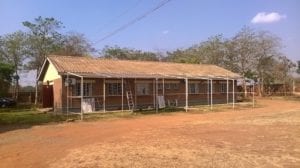 As part of the Solar Expansion project, the electricians mounted the 10 solar panels on the structure outside of the Equip office building on the Partners in Hope property. We ran the cables for the solar system on the Equip building and finished the wiring to the inverter. There was a reasonable chance the inverter would ne synchronize because we did not have enough solar power to turn it ON. Unfortunately, we finished in late afternoon with the sun already going down and there was not sufficient DC voltage from the panels to turn the invert ON. The inverter did BOOT up ok and is ready to go.

Heading home again with a better idea what needs to be resolved. I learned much from Siya of SMA South Africa about the Sunny Island inverters and Mul-tCluster Box. Nevertheless, the SMA technical staff in Germany said that it would work in the configuration I suggested and planned for. BUT it does not work adequately even in the present configuration that Siya suggested. It presently is “working” somewhat but there is still a problem with the Neutral to Earth Contactor in the MultiCluster Box. This has been the basic problem I pointed out to SMA Germany on the very first visit. Basically, it comes down to we need a MIRACLE that the technical folks in Germany will resolve this with a “frmware” revision. It is in God’s Hands. Please pray the God will assist Siya to explain this to SMA Germany with data, drawings, and waveforms that he and I put together.