Tenwek Hospital run by World Gospel Mission has almost completed the building of an Eye and Dental Clinic. Our part this time was to provide piped medical gases (oxygen, medical air, instrument air and vacuum) for outpatient surgery in the new clinic and to provide battery backup for power outages.

Our first trip to Tenwek was back in 1986 when we spend 6 months there as the Wright family for the completion of the hospital’s first hydroelectric plant. It’s been our privilege to return countless times for various projects at this hospital which has the motto, “WE TREAT JESUS HEALS” at the hospital entrance. 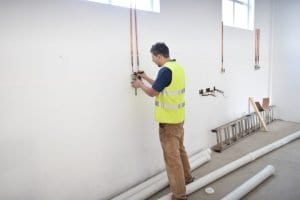 Our first site visit to the new Eye and Dental Clinic building was a bit disappointing in that the building does not have electricity and the rooms where the machines were going were full of cement and a personnel locker room. The layout of the building was pretty much according to plan but the arrangement of ceiling being very tall and windows being very low will make the piping difficult. The walk through with the doctor was helpful because eye surgery has the doctor at the end head of the table not to the side as normal surgery. This means the machines that he uses are to each side of the table. No worries we just move the outlets a bit. There is much to do even for this simple system of 28 outlets. As we always say, the impossible just takes a bit longer.

While I supervised the unloading of about 40% of the container, the rest of the crew worked on the installation of the battery inverter system. They made good progress using head lamps to work because there was no lighting in the area. I used several of the crates from the container as work benches for pipe preparation. I got the work area set up so we can fabricate brackets to hold the pipe and fabricate the extensions on the outlets. 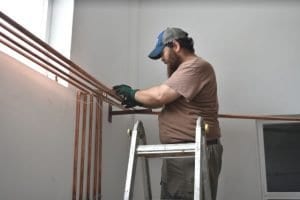 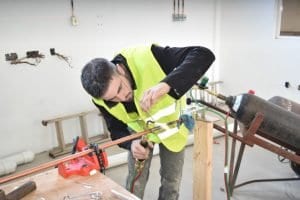 We brazed cropper pipe fittings with great success. We also had fabricated all of the support brackets for the piping. There were some misunderstandings on the 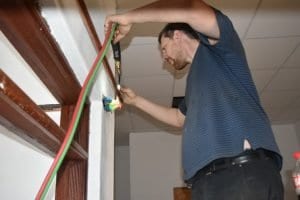 layout of the outlets that required us to move devices “several” times. After another walk through, we go it straightened out. We even went to the extent of reusing the plastic wall anchors to conservematerials. Nothing that a little concrete patch and paint will not fix. We have been able to “DRY” fit all the piping in the Surgical Area. 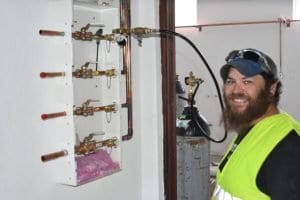 Today, we started the pressure testing of the piping which means the pipes are brazed together and purged. This was a great encouragement. So far we have had one leaky outlet and two leaky brazed joints out of about 100 connections. I calibrated the medical gas alarm limit switches before the assemblies were attached to the piping and secured above the suspended ceiling.

A big challenge was the moving day to extract the heavy machines from the container and place them in the appropriate rooms in the new building. There was six men in flip flops and Richard the supervisor. I have worked with Richard a bunch on past projects. He is a smart hard worker. They had no rigging or machines to move the equipment. They had four small round logs to move the equipment like the Egyptians moved stones for the pyramids. It took at least an hour for each piece. Unbelievable! 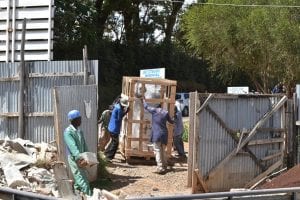 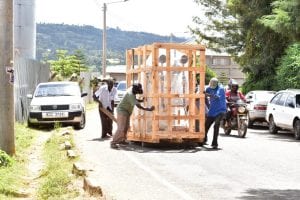 In addition, all of the O2, Medical Air, Instrument Air, and vacuum outlets (30 in total) in the Eye Surgery and Recovery Areas along with the Zone Valves and Main line valve with alarm switches were plumbed and pressure tested in spite of numerous changes. 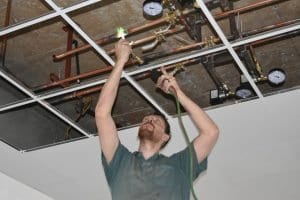 The first thing I did was remove suspended ceiling tiles according to the route the last long pipe run will take. I was covered in “matter” that had collected on the top side of the ceiling tiles. Peter and Ryan started the fabrication of the brackets and got them installed along the route. Noah continued with fittings and brazing the piping together. The group now runs without my presence in fact I am generally in the way. I fixed a gauge on the Instrument air compressor and several small things.

Sometimes we are asked to do scary things. I just happened to do two of them today. The first nearly scares me to death every me I have to install large batteries. I really never had a major arc or short across battery terminals but I have heard horror stories and seen the aftermath in burns of a bad mishap. Let us just say I am extremely attentive to installing the jumpers on these big batteries. I did the hookup of three sets of eight batteries. Fortunately no problems and I used my insulated ratchet set just to make sure. The SMA Inverter system commissioned without problem.

Peter got the wires installed for the alarms and signaling on the medical gas system. Ryan and Noah finished the brazing of the pipes. Pressure testing has gone well except one threaded joint in the vacuum system.

Isn’t it ironic that “The Ladders” came the day we finished. I thought the group picture would be fun around “The Ladder.”

The electricity to the building is scheduled “soon.” Since we did not get the electricity we were not able to actually commission the machine even though they are completely installed.