I again claimed the 11th Beatitude which states “Blessed are the Flexible as they will not be bent out of shape.” After taking lunch at the guest house at Tenwek, I ventured up to the x-ray room #1 not knowing what to expect. The old GE machine with overhead tube crane had been removed which was a huge blessing for me. Joshua indicated it was removed in pieces which sounded a bit savage. The walls have been patched where the old controls were but not yet painted. Richard and his crew were working on installing the leaded door frame for the technicians. The ceiling was finished and one of the men was just getting started with paint. I think I starred at the ceiling for quite a while before talking with Richard. Something just did not look right. The steel beams in the ceiling were shimmed out 3″ to match the drop ceiling using wood. Richard told me that we could attach the structure to the wood. Now the tolerances on this are less than 2 mm (1/16″) over the 14′ length. I highly suspect that a Kenya hand planed wood beam of 14′ would vary more than 1/16″. I needed to attach the frame for the new overhead tube crane directly to the metal beams but that would require removing the ceiling. Richard and I talked of several possibilities but ceiling removal seemed to be the only workable op on. Within 1 hour the removed the ceiling and all the supporting wood. 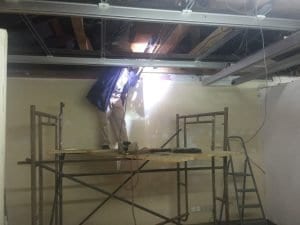 Meanwhile we found the container with all the pieces and started to open the crates. I found all the initial parts so I got the guys to transport the goods to the x-ray room in an old pickup truck. All the ladders are tied up so we used a scaffolding section, one step stool, a table and some sawhorses for ladders. Nevertheless, I had a super group of nationals helping me. They quickly welded into place the Unistrut cross supports. Then, they had to remove 5″ off the top of the new wall and the ceiling structure surrounding it. We got our first big piece of the overhead tube crane installed which turned into a much bigger job than anticipated because the new room is quite small and we had to go to extreme steps to get this installed. I had two nice hoists to help with the controlled lift as we put up the transverse section. 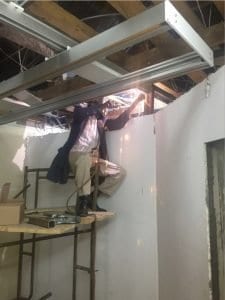 Installing the table and chest stand went well with the help of the PLC Laser device. When correctly positioned, the Laser gave very accurate positioning for the equipment. Tying up loose ends and cables was a challenge because the cables that came with the machine were long in the anticipation that the physical size of the room would be rather large. We coiled them up and attached them to the wall mostly behind the x-ray machine control cabinet. Next, I set the detents on the overhead rails so the machine will be in correct position for chest x-rays, 40″ from the table top, and 40″ to the chest stand. Working with the overhead tube crane controls was very

frustrating because of pitiful factory documentation. I tried for nearly 30 minutes to get into the service mode as I have a couple of things to check and calibrate. I did it once yet I needed to check the physical calibration again. The x-ray machine worked well and the x-ray calibration was nearly perfect as I had set the calibration during pre-staging in Marion, IN. With just a few minutes of training, the national radiology staff started using the machine getting great results. 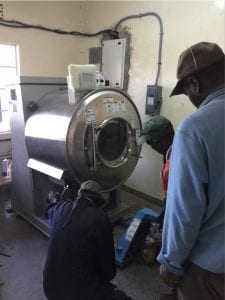 Next, we went to laundry to install a new washer/extractor. Sure enough the room layout was not according to what we talked about at the end of our last trip. I got the national staff to remove an old wash machine foundation steel and relocate the drain pipe. To facilitate the position of the foundation anchor bolts, we positioned the new machine in place and drew out the foundation holes for the anchor bolts placed is grout.

After allowing the anchor bolts in the grout to set up for a day with the machine in place, I tightened the large bolts on the Milnor Washer/Extractor foundation and assembled all of the covers. Next, I verified the correct voltage, phase sequence, and fuse sizes. Commissioning the machine worked well. The new touch screen gives very good 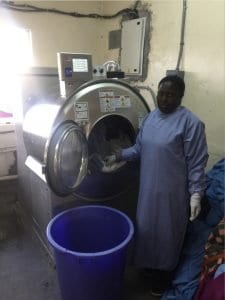 information about the status of the  machine. I took me with the national staff to explain the procedures. The only problem which still needs to be sorted out is the water supply capacity. It is woefully inadequate so it takes about 12 minutes to fill which seems like eternity. I rearranged the power to the booster pump so it runs continuously which helped some. To say the least they will need to rework the water supply and booster pumps.